Could anyone help in solving this problem involving liquid air?

Please explain this problem. I can not find the solution online.

As you might know, the saturated vapor pressure is function of temperature only, i.e. p=p(T). Based on description of task, it can be infered that before compressing, the whole nitrogen is in its gaseous state because the system is in nitrogen’s boiling temperature at P_a=1\space\text{atm} (T=77.4\space\text{K}), but the initial pressure is P_0=0.5P_a. Oxygen may be in both liquid and gaseous states because it’s boiling temperature is lower than that of the system (T_2=90.2\space\text{K}), but the pressure was also given for P_a=1\space\text{atm}. Though these initial assumptions are not necessary, because everything can be derived through exact equations.

The p(T) relationship can be found using Clapeyron-Clausius equation (for oxygen q=213\space\text{J/g}):

The “s” superscript in P^s_{O_2} is for “saturated”, while P_{O_2} is an arbitrary partial pressure of oxygen. Throughout this problem, while oxygen is in phase equilibrium, the pressure of the gaseous oxygen is constant (because T=\text{const}), so it’s phase state (as well as for nitrogen) should also satisfy the ideal gas equation, that’s why during the compression, the ratio between masses of liquid and gaseous oxygen continuously changes, i.e.

where n^g_{O_2} is number of moles of gaseous oxygen and primarily depends on volume. Obviously, if n_0=1.1\space\text{moles}, then

Now let’s finally find these distinctive points. Let’s assume that at the start none of the substances haven’t started condensing yet. There are three ratios n_{O_2}/n_{N_2} which I will denote as \alpha. For initial state we have (“0” superscript above pressures implies initial partial pressure)

Next we reach the first distinctive point when nitrogen starts condensing, so we need P_{N_2}=P^s_{N_2}=P_a, or

Then we reach the second distinctive point when oxygen starts condensing. For this case we have P_{O_2}=P^s_{O_2} but still n^g_{O_2}=n_{O_2}=\displaystyle\frac{\alpha}{\alpha+1}n_0, and the corresponding volume is

In this case P =P^s_{O_2} + P^s_{N_2}=P_a(1+\beta). I’m not sure about my solution because probably these three quantities of \alpha may lead to notable difference of the corresponding processes.

There is also a problem with similar physical setting, Tuymaada-2021 Problem 5 of Senior League, as far as I remember. But the idea of that problem was absolutely unobvious))

Thanks a lot! I will check the Tuymaada 2021 Problem 5 as well. From what I can see, I need to study this topic more deeply.

By the way, have you solved some WoPhO problems earlier? Do you think they can be considered more difficult than APHO? WoPhO problems can be found here: https://wopho.olimpicos.net/

can’t comment on this, i haven’t solved any of wopho problems at all

Where can I find Tuymaada 2021 physics olympiad problems? Could you send the website link?

well, if the problems still weren’t uploaded on tuymaada.lensky-kray.ru, then i only have these photos: 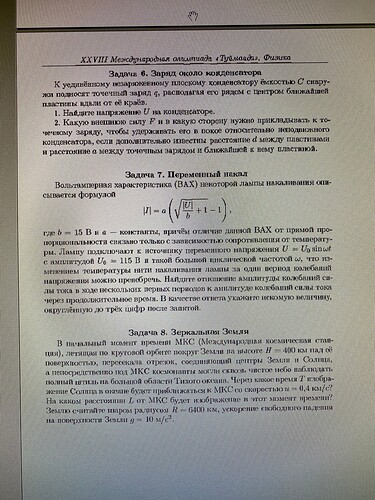 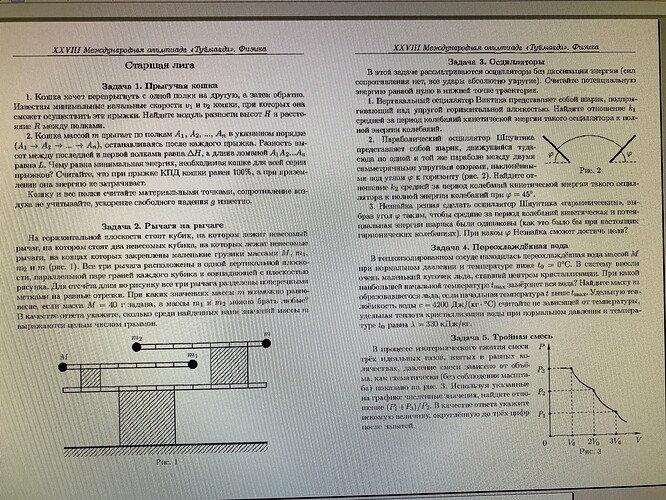 Thank you! I’ll try the problem 5. Some links I have of international olympiads of various countries along with solutions (in ENGLISH), I am sharing here it might be interesting for some other students:-

Past NBPhO and Est-Fin Problems and Solutions, from 2003 until 2022. A PDF collection of problems and solutions from the Nordic-Baltic Physics Olympiad and Estonian-Finnish Olympiad in Physics

Past EuPhO Problems and Solutions, from 2017 until 2022. A PDF collection of problems and solutions from the European Physics Olympiad

Past RMPh Problems and Solutions, from 2010 until 2022. A PDF collection of problems and solutions from the Romanian Master of Physics